As Chris Zaldain left Palatka, Florida for the seven-hour drive to Lake Lanier, he experienced a bit of déjà vu. The road took him through Atlanta, up into the Georgia foothills, and he felt himself being transported “back to Northern California.” That told him much of what he needed to know and informed the choices that led him to a runner-up finish in the year’s second tournament stop, his best finish in a regular-season Elite Series tournament to date. While spotted bass all share some genetic material, he divides them into two strains in his mind – the Coosa River variety who love stained water and current, and the upland reservoir group who love to live in clear water and “see 360 degrees all the way around.” Since he knew that Lanier’s upland fish feed heavily on nomadic blueback herring, he also expected that it would be “all visual” and resolved to spend time as far downlake as possible.

“I’ve always done well on spots within sight of the dam in the pre-spawn,” he explained. “The biggest food source for them tends to be there and that brings in the greatest population of huge fish.” He was only catching seven or eight bass a day during the event, but by staying put in that zone he felt that he was “fishing for the win.” By staying deep, in the 35- to 60-foot zone, he was also dealing with the most stable population of fish, which was critical because weather conditions changed constantly during the course of the mid-February week.

Zaldain focused on long tapering points that were connected to the bank – islands and humps were not as good – and the best ones eventually dropped into the river channel. There’d be manmade brushpiles in the 30 to 35 foot zone, then a sliver of rock, and then standing timber out deeper.

“If you could find a little alleyway where you could swim a lure clearly between the timber and the brush, you’d get bit 100 percent of the time,” he said.

The majority of the fish that he weighed in came on a 3-inch Megabass Spark Shad and a 4.2-inch Hazedong Shad

Small lures that pack a big punch because even big spotted bass have little mouths. The former was in Hiuo, “a real opaque white color,” when it was cloudy, or a translucent Glow Marker pattern when it was sunny. He fished the Hazedong Shad in Moroko. Both were affixed to ¼ and 3/8 ounce ballhead jigs. These two swimbaits fit the bill because early in the season “you want subtle baits without too much tail action and those both have a perpendicular-style tail, not a boot style tail like a Magdraft or a hollow belly which have more of a kick or wiggle.” Also, there was 8- to 10-feet of visibility most of the time so he feels that the lifelike eyeballs and molded fins convinced fish to bite. 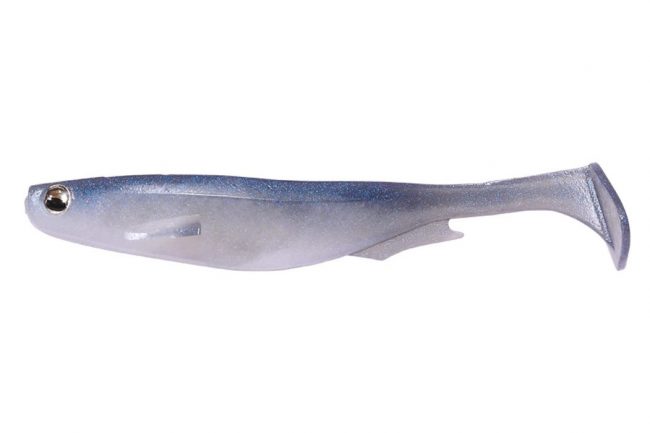 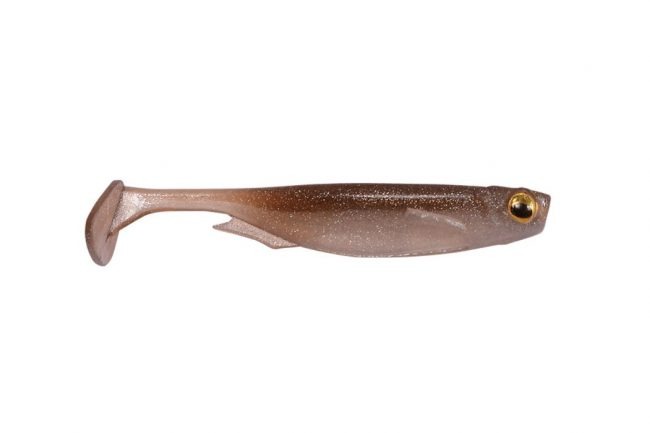 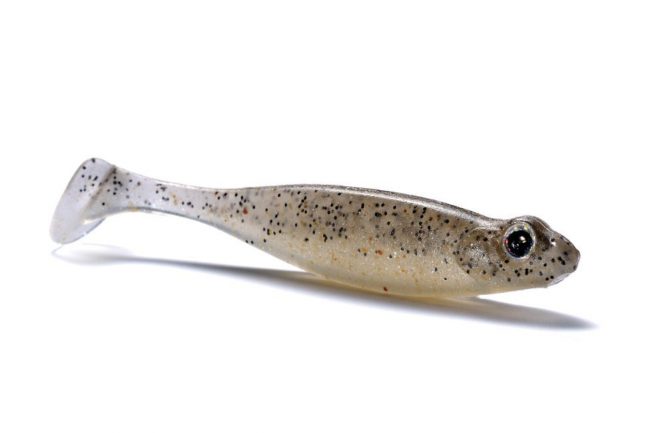 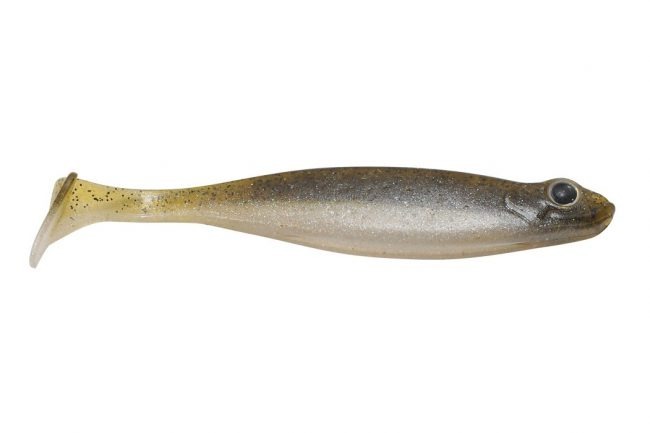 “I knew if I could get those baits around them they’d bite it,” he said. 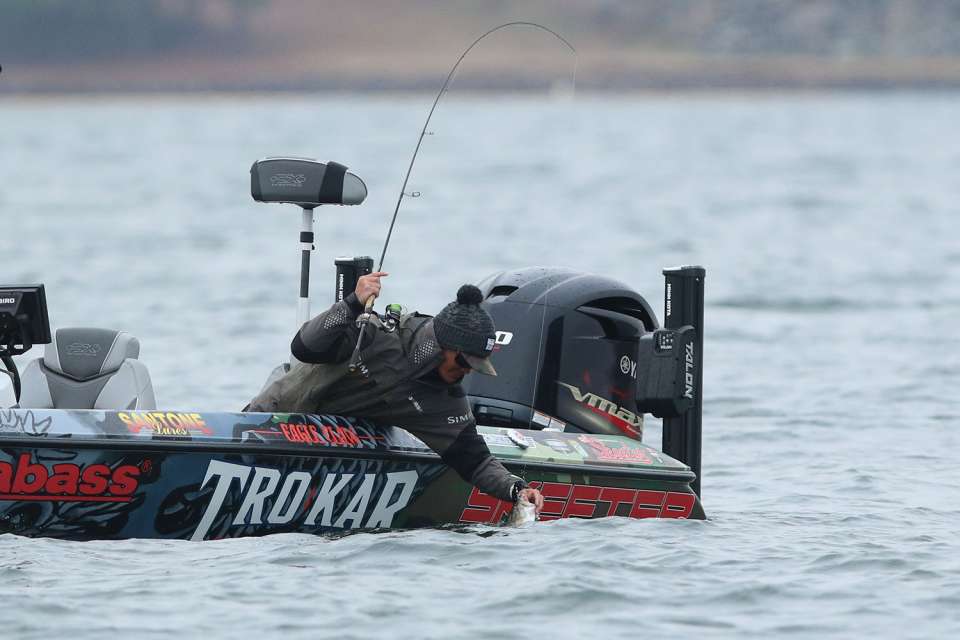 It was critical to keep finding new water. As the tournament week progressed, the fish moved further out on the points. Zaldain used his Humminbird electronics and Lakemaster Chip to find new points and unpressured schools that were susceptible to his presentation. Because he was fishing far deeper than most of the field – and continued to push out as the event progressed – he largely had his best places all to himself. “The difference between finishing 2nd and 10th was pushing on and finding new spots on the fly.”

The key with the swimbaits was to go “low and slow” and to retrieve the bait uphill so it would remain in the strike zone. Most of the fish were within 2- to 3-feet of the bottom, the brush or the timber, and when he went too quickly and pulled it away from them that’s when the bites stopped coming.

“I’d position the boat on the brush and cast to the trees, letting it fall in 60 to 65 feet of water,” he called. “It would take three to five minutes to bring it in on the end of a long cast. You had to have the utmost confidence to let it soak in the strike zone. The beauty of the Spark Shad is that you barely have to move the handle to get the tail moving. You don’t need to move it very fast or very far for the tail to move subtly.” A lot of times the bite would be “like a crappie bite,” he added, “instead of swimming off with the bait.” That’s where the sensitivity of his 15-pound braided Seaguar Smackdown mainline (attached to an 8-pound Seaguar Tatsu leader) and ultra-sensitive Megabass Destroyer Addermine rod became critical. He could feel those bites easily, keep reeling to gain a solid hook set, and then achieve hook penetration even with a lot of line out.

The perfect line setup is “everything,” he said. Braid has a major “parachute effect” so going heavier there would prevent the lure from getting down easily, while straight fluorocarbon’s increased stretch would’ve inhibited solid hooksets. The 15-pound braid was the key size and key link to maximize effectiveness. The Addermine, he explained, “Is the most sensitive spinning rod that I own. The key was to feel everything – tree tops, rocks, pieces of brush. With that moderate action I could drive home the little hooks.” 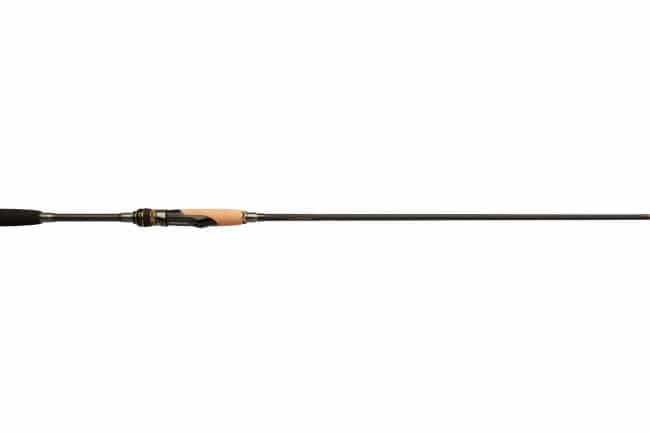 As seven straight days of fishing on the tails of six days on the St. Johns ground on, Zaldain also said that it was critical to maintain his concentration to maximize his spots. The rod and line combination allowed him to stay in contact with his bait, but his intimate knowledge of swimbaiting for big spotted bass allowed him to trigger recalcitrant biters.

“I always tried to have my rod tip almost pointed toward the bait,” he explained. “Then, when I would get a bump or one would barely grab it, I’d pop it and slow it down so it was almost like a pendulum. When they hit it like that, there’s probably another one behind it trying to get it, so it’s important to keep that tail moving, slowly and subtly.”

The result was a consistent event, with three bags over 16 pounds and a fourth over 18 pounds that left him just 14 ounces short of the victory. His spots were a better average size than those caught “by the guys cranking the bank or fishing up the river,” and it demonstrated a finesse swimbaiting pattern that can be duplicated wherever sight feeders live.